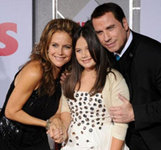 John Travolta and Kelly Preston will have a new guest at their Thanksgiving table.

A publicist says the couple welcomed a baby boy Tuesday in Florida. They named their new son Benjamin. The eight-pound, three-ounce boy was born at an undisclosed Florida hospital.

Spokeswoman Samantha Mast said in a statement late Tuesday that the couple and their daughter, Ella Bleu, "are ecstatic and very happy about the newest member of the family." The statement says Preston and baby Benjamin "are healthy and doing beautifully", The Associated Press reports

Tragedy struck the couple in January 2009 when their eldest son, 16-year-old son Jett, died after suffering a seizure while on holiday with the family in the Bahamas.

They are also parents to a 10-year-old daughter, Ella, Sky News informs.