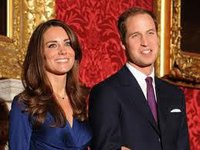 London's Westminster Abbey has emerged as the firm favourite to be the venue of Prince William's wedding after being visited by his bride-to-be, Kate Middleton. The 28-year-old paid a brief visit on Wednesday night to the Abbey, which has hosted the weddings of the Queen and Queen Mother and was where the funeral of William's mother, Diana, Princess of Wales, was held.

However, the couple, who are spending their first day apart since announcing their engagement, said they needed more time to make the final decision about where and when they make their vows, The Press Association reports.

A royal representative spoke to confirm Kate's visit to the venue, but wasn't giving any secrets away.

‘Miss Middleton paid a private visit to Westminster Abbey to consider the options and meet key staff there,' the spokesperson said.

Kate was surrounded by William's royal aide's during her trip, as well as royal protection officers, who were assigned to her from the day the engagement announcement was made, Marie Claire says.