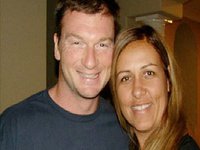 An Emmy-nominated reality TV producer accused of killing his wife at a Cancun resort earlier this year was arrested Tuesday by U.S. authorities at his Rancho Palos Verdes home.

Bruce Beresford- Redman, 38, was home alone at the time of his arrest and offered no resistance to the U.S. marshals and FBI agents who took him into custody. His arrest comes five months after Mexican authorities accused him of murdering his wife, Los Angeles Times informs.

Monica Beresford-Redman, 41, co-owner of Zabumba, a popular eatery and nightclub in Palms, was found April 8 in a septic tank at the luxury hotel where the couple was staying. Mexican officials said the woman died of "asphyxia by suffocation."

Federal authorities arrested Bruce Beresford-Redman on Tuesday, more than seven months after his wife Monica's body was found at an upscale Cancun resort.

Mexican authorities want him returned to stand trial on an aggravated homicide charge, although Beresford-Redman has previously indicated through his attorney that he plans to fight extradition, The Associated Press reports.