Last but one film of Harry Potter saga shown in London 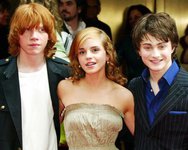 Last night saw Leicester Square transformed into the world of Harry Potter as stars from the film walked the red carpet for London's premiere of the first part of the final installment of the popular franchise.

Fans who camped over night to catch a glimpse of their favorite boy wizard were not disappointed when Daniel Radcliffe (Harry), Emma Watson (Hermonie) and Rupert Grint (Ron) appeared on the red carpet and signed autographs.

Having gone to their first Harry Potter premiere in 2001 when they were only 11-years-old, Daniel, Emma and Rupert looked every bit the grown ups they've become, Entertainmentwise reports.

The adaptation of J.K. Rowling's seventh and final novel comes in two installments, with the second film due out next July.

Fans may leave frustrated that they have to wait eight months for the finale. But Rowling's last book needed to be broken into two parts for the big screen, said Daniel Radcliffe, who stars as Harry.

"Harry Potter and the Deathly Hallows: Part 2" will bring to a close one of Hollywood's most remarkable film franchises, a gambit of more than a decade by Warner Bros. to bring all of Rowling's novels to the screen before the young stars outgrew their roles.

The result will be a 20-hour saga allowing fans to watch Harry grow from a shy, neglected 11-year-old to a bold, noble young man.

"I don't think it'll take too long before these films do finish and finally come out for cinemas all over the world to be having 'Harry Potter' marathons, where they just play them all back to back," Radcliffe said. "And I imagine attendance will be huge," The Associated Press informs.

Politics
In Russia, Alexey Navalny gets what he thought he would
Columnists
Big Tech cancels free speech in America
Politics
Alexey Navalny urges Russians to take to the streets