Chinese vase flabbergasts sellers as it fetches $69 million at auction 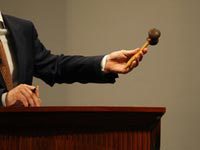 A Chinese vase discovered during a routine clear-out of a bungalow in northwest London has sold at auction for a record 43 million pounds ($69 million), leaving the sellers flabbergasted.

In scenes reminiscent of the famous Only Fools And Horses episode that finally made Del Boy Trotter a millionaire, the price of the vase kept rising.

And the brother-and-sister owners who had inherited the piece had no idea of its value, according to Sky News.

According to the auctioneer, the vase dates from the 1740s from the Qianlong period, would have resided "no doubt" in the Chinese Royal Palace and was fired in the imperial kilns.

The auctioneer said it was a mystery how the 16-inch high piece ended up in London. Its provenance was described simply as belonging to an English family collection, probably acquired during the 1930s.

"It is a masterpiece," the auction house wrote in its blog before the sale. "If only it could talk!!", Reuters informs.