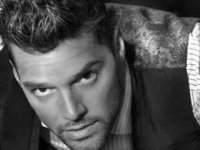 Gay singer RICKY MARTIN is adamant he will one day marry his boyfriend, but not until they are legally allowed to wed in his native Puerto Rico. The Latino star announced he is gay earlier this year (10) after years of speculation about his sexuality.

Martin has also revealed he is in a serious relationship and he is keen to exchange vows with his lover - but it is currently against the law to have a same-sex wedding in his homeland. The Livin' La Vida Loca hitmaker has considered making his union official in Spain or Argentina, where gay marriages are legal, but he is determined to wait until he can marry in Puerto Rico, ABC15 reports.

Ricky says he's in a committed relationship, but is not ready to reveal his partner's identity just yet.

"We know it'll happen eventually. It's not something we think about every day," he said.

"We are happy. My kids love him. He loves my kids. We're in love with each other.", according to Showbiz Spy.