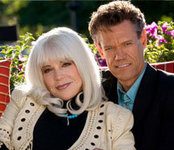 Country music singer Randy Travis and his wife-manager Elizabeth Travis are pulling the plug off their 19 years of marriage. On Friday, October 29, spokesperson Maureen O'Connor has confirmed to People that Randy and Elizabeth have ended their marriage and "the divorce was finalized as of this morning."

In a statement, it was revealed that "Elizabeth and Randy Travis have agreed to part ways. Elizabeth will remain Mr. Travis' personal manager. They do not intend to comment any further and ask for your respect for their privacy during this time," according to AceShowbiz.

A petition for dissolution of marriage was filed by Randy Travis, 51, in Albuquerque, N.M., on Thursday. They have a home in Santa Fe. The petition calls for an equal split of assets but offers no clues about why the Travises split, other than saying a "state of incompatibility exists between the parties."

The couple's 34-year business and personal relationship began when a teenage Travis won a talent contest at the Charlotte, N.C., nightclub that his future wife owned in the mid-1970s with her first husband. They married in 1991.
They moved to Nashville in the early 1980s. Travis was turned down by most of the record labels in town because he was considered too country, Press Herald reports.