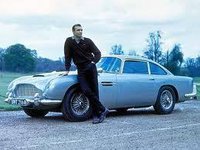 An Aston Martin driven by Sean Connery in the James Bond movie "Goldfinger" is estimated to fetch as much as $10 million at a London auction today.

The 1964 silver DB5, also used in ‘Thunderball," is the most famous of 007's vehicles and has twin machine guns, revolving number plates, a bullet-proof shield and an ejector seat. Its minimum estimate is 3.5 million pounds ($5.6 million), Bloomberg says.

The 1964 DB5 is being sold by American DJ Jerry Lee, its first and only owner. Mr Lee, who paid just over £8,000 when he bought it in 1969, is hoping to raise around £3.5m and plans to put the money into his charitable foundation.

"The James Bond car has brought me much enjoyment for some 40 years," he said. "Even as I sell it ... the car will continue to give me great pleasure as it furthers the mission of the foundation to do good around the world."

The car, one of two original 007 cars, is part of the annual RM's Automobiles of London sale, Sky News informs.