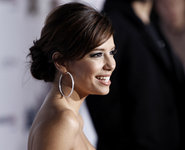 Actress Eva Longoria Parker suffered only minor injuries after being involved in a minor car accident Wednesday evening in Hollywood.

The "Desperate Housewives" star was driving eastbound on Hollywood Boulevard at about 7:30 p.m. when another car made a left turn into a parking lot and hit Longoria Parker's car.

The 35-year-old actress complained of pain but was not seriously hurt, according to Los Angeles police Sgt. Kara Silverstein of the department's West Traffic Division, CBS News reports.

Los Angeles police said the actress was heading eastbound on Hollywood Boulevard on Wednesday evening when another driver made an unsafe left turn into a parking lot and hit the star's car.

Eva plays the role of Gabrielle Solis on Desperate Housewives. She is also a model for L'Oreal, and married basketball star Tony Parker in 2007, according to The Press Association.