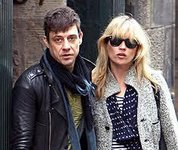 Supermodel Kate Moss secretly wed her rock guitarist boyfriend Jamie Hince in a ceremony in Sicily in August, according to reports in Britain on Friday.

Moss, 36, and Hince, 40, exchanged vows before a handful of friends and family in a ceremony on the Mediterranean island, the Daily Mirror tabloid reported.

The model walked up the aisle barefoot and wore a see-through white gown for the ceremony in a small church, AFP says.

Kate - who wore a see-through white dress and was barefoot for the ceremony - and Jamie reportedly decided to go to the idyllic island to avoid as much attention as possible, and chose a small picturesque church to declare their love for one another.

The British star's eight-year-old daughter Lila - whose father is Kate's ex-boyfriend Jefferson Hack - was one of three ringbearers at the ceremony, Times LIVE informs.