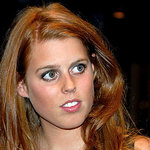 Princess Beatrice escaped unhurt as her car smashed between a bus and a coach near Buckingham Palace -- home to her grandmother, the Queen.

Princess Beatrice burst into tears after her BMW car was caught between a double-decker bus and a coach in London. Her bodyguard was sitting in the passenger seat. Both climbed out of the car unhurt.

Princess Beatrice, 22, is the daughter of Duchess of York Sarah Ferguson and Prince Andrew and is fifth in line to the throne Sify reports.

"Beatrice was sandwiched and her cherished car was pretty badly damaged on both sides," a source told London's Daily Mail. "It was all very hairy - she was in tears and traumatised. She had a lucky escape."

Another car came to pick up the royal heir, who is fifth in line to the throne of England, and she reportedly unwound later that evening with her boyfriend, Dave Clark, at a party.

Beatrice attends Goldsmiths College, part of the University of London, where she is studying history, according to New York Daily News.

Like many members of the Royal Family, the Princess drives herself around London but car crashes involving the monarchy are rare.

Princes William and Harry are known to speed around the streets on high-powered motorbikes, while the Duke of Edinburgh is said to drive a private black cab.

A Scotland Yard spokesman said: "We can confirm there was a collision between a car, bus and coach on Monday at Hyde Park Corner. The drivers exchanged details and no police action was necessary," The Press Association informs.