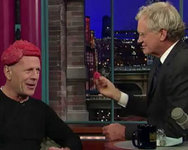 In what could be a potentially controversial - yet very funny - trend, Bruce Willis appeared on David Letterman's Late Show with a "hairpiece" made entirely of meat - and had the host eat from it. Bruce Willis, always the guy to count on for a good laugh, walked in on the set with something that looked like a red helmet on his head and which, he proudly announced, was his new hairpiece.

Unlike regular hairpieces, this one wasn't made of hair, though it was 100 percent natural, by all means: the piece covering the bald actor's head was made of meat, Softpedia says.

"Showering? Not a problem," Willis joked. "I took a shower a couple hours ago. Lather, rinse, repeat, and tenderize."

And to make things more bizarre, Willis soon after offered the talk show host a sample of the meat, which Letterman surprisingly took up.

After a chewing uncomfortably for a few seconds, Letterman walked off stage to relieve himself of the bite he took, according to CBS News.