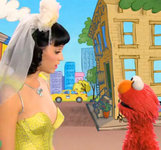 Katy Perry's cleavage is fine for Russell Brand - not so for Elmo and Sesame Street. The children's show says it won't air a taped segment featuring the "California Gurls" singer and Elmo.

The pop star - who is known for her risque outfits - wore a gold bustier top as she sang a version of her hit "Hot N Cold." But some felt it was too revealing for the kid set, The Associated Press.

Producers for the programme said parents felt the yellow bustier dress Perry wore during a performance with Elmo showed too much cleavage.

"In light of the feedback we've received on the Katy Perry music video which was released on YouTube only, we have decided we will not air the segment on the television broadcast of Sesame Street, which is aimed at preschoolers," the show said in a statement.

Sesame Street regularly invites actors and singers onto the show, with scripts adapted so both young children and adults find the sketches funny. Perry is not the first celebrity to be pulled from the show.