Panic in Mexico as hundreds of crocs escape 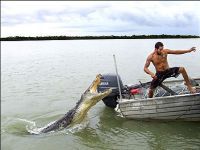 Hurricane Karl has left a swathe of destruction across Mexico, flooding large areas of the State of Veracruz, where after one of its wettest summers in history, the heavy storm waters led to the escape of hundreds of crocodiles in Antigua last weekend.

The flooding caused the waters of the lakes in the crocodile farm to rise in the Mexican city of Antigua in the State of Veracruz, and consequently the 280 crocodiles, up to three metres long, escaped from their environmentally protected reserve, dedicated to reproduction and rehabilitation of the reptiles.

The alert reached the Governor of the State, Fidel Herrera Beltrán, who tried to calm down local residents saying that the stories that 400 crocodiles had escaped were untrue, and that the real figure was nearer 280.

With the waters of the River La Antigua receding now, it is thought the animals should be easy to spot. However the local authorities have told the population not to approach the animals, all from the Moreletti sub-species.

As Hurricane Karl hit Mexico on September 17, it had strengthened to a Category 3 hurricane, with sustained winds of 120 mph (195 kph). After hitting land, it slowed to a Category 2 with winds of 100 mph (160 kph) and flooded large areas which had already experienced one of the wettest summers on record.