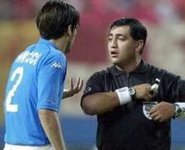 Byron Moreno, a former Ecuadorian football referee who officiated at the 2002 FIFA World Cup has been arrested for suspected drug smuggling. Moreno was arrested at John F. Kennedy International airport after he arrived on a flight from Ecuador.

During a routine check, security found 10 clear bags containing nearly 10 pounds of heroin. The drugs had been strapped to his body and concealed in his underwear. In a complaint filed in a Brooklyn federal court it said that during the inspection Moreno "became visibly nervous."

It also said "A customs agent felt hard objects on the defendant's stomach, back and both of his legs. A strip search revealed that the lumps were 10 clear plastic bags containing more than 10 pounds of heroin", Wikinews informs.

The Ecuadorian is best remembered for refereeing the infamous second round game at the 2002 World Cup between co-hosts South Korea and Italy.

The 2002 competition has gone down in infamy due to the huge number of refereeing mistakes that helped eliminate a string of top nations, and also ensured that Korea made it all the way to the semi-finals, Goal.com says.