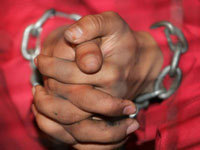 The U.S. Supreme Court on Tuesday refused to halt the execution of a Virginia woman who planned the murders of her husband and stepson, meaning that the state is almost certain to execute its first woman in nearly a century.

Teresa Lewis, 41, admitted that she plotted the 2002 killings of her husband, Julian Lewis, and his son, Charles "C.J." Lewis, to collect insurance money. Lewis is scheduled to die by injection Thursday night, Washington Post reports.

The court's decision followed Virginia Governor Bob McDonnell's refusal to reconsider a clemency request, which he rejected on Friday.

"A good and decent person is about to lose her life because of a system that is broken," said attorney James E Rocap III, who represents Lewis.

He said he was referring to the decision by the Supreme Court and McDonnell's rejection of clemency. Mr Rocap appealed to Mr McDonnell to reconsider his decision to deny clemency to Lewis, claiming new evidence should spare her the death penalty, The Press Association informs.