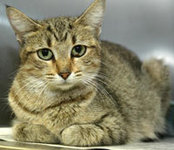 A British woman who became the target of international scorn after she was caught on camera tossing a cat into a trash bin has been charged with two counts of animal cruelty.

Mary Bale hit the headlines last month after she was filmed stroking a 4-year-old tabby cat called Lola, which she suddenly grabbed by the scruff of its neck and dumped in a bin before slamming the lid shut.

The cat's owners, Stephanie and Darryl Mann of Coventry in central England, found the distraught and hungry Lola some 15 hours later. The footage outraged animal lovers around the world, with some calling for her death, AOL News reports.

RSPCA (Royal Society for the Prevention of Cruelty to Animals) officials today announced Bale is to face two charges of animal cruelty.

The charity said in a statement: "Mary is due to appear at Coventry Magistrates Court on Tuesday October 19 to face two criminal charges, contrary to the Animal Welfare Act 2006.

"The RSPCA has taken the case to court as two alleged offences have been committed - of causing unnecessary suffering to a cat and of not providing the animal with a suitable environment.

Bank worker Bale, 45, has refused to comment since giving a statement to RSPCA investigators, The Sun reports.