Teacher sentenced to 90 days in jail for grabbing student's ear 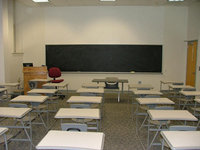 Rushing pleaded guilty to simple assault for grabbing a student's ear and forcing him out of a classroom on Feb. 19, after the student, who didn't belong in that class, cursed at Rushing and refused to leave. Rushing resigned after the incident, NJ reports.

DeVesa sentenced Rushing to 90 days in jail, allowing him credit for the time he served since entering a guilty plea, along with revoking his right to work as a public employee in the state of New Jersey.

Rushing coached for 25 years in Philadelphia, Sommerville, Holyoke, Mass., before joining the staff at Monroe High School. He claims to have played the "Dad" role to 60 young men on the football team at an inner-city Philadelphia school and claims if asked, his former students would vouch for his dedication, there would be a long line outside the courtroom. However, the only supporters present in the courtroom for this former teacher were his parents, Examiner says.