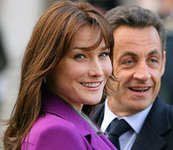 French first lady and former model Carla Sarkozy-Bruni says in a new biography that Michelle Obama warned her life as a president's wife was "hell". According to Sarkozy-Bruni, she asked Michelle what life was like for her since husband Barack Obama won the presidency.

In "Carla and the Ambitious," which the U.K. Daily Mail newspaper reviewed for Thursday editions, Bruni quotes the first lady's lament, among many other revealing episodes with global leaders and French paparazzi.

Bruni, a singer and former model, apparently collaborated on the book with writers Yves Derai and Michael Darmon as a push-back to an unauthorized biography of the wildly untraditional political spouse that was released Wednesday. Bruni's book is due out on Friday, FOXNews informs.