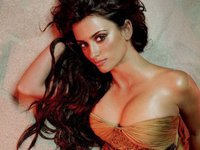 Spanish actress Penelope Cruz has confirmed she is pregnant with her first child, putting an end to rumors fueled this week by a photo showing off the star's growing belly. The actress, who recently married 'Eat Pray Love' actor Javier Bardem, is four-and-a-half months pregnant, reps for the pair confirmed to PEOPLE.

Cruz and Bardem did their best to hide the news, but speculation of a pregnancy intensified when during a visit to Los Angeles, she was seen wearing a trench coat that hid her figure. Then this week, a photo emerged from the set of the latest 'Pirates of the Caribbean' movie where she sports a pretty clear baby bump, PopEater reports.

Cruz, 36, and Bardem, 41, wed back in July during a small, discrete ceremony in the Bahamas. The two, who are notoriously known for keeping their relationship ultra private, started dating in 2007.

They appeared together in Woody Allen's 2009 flick, "Vicky Cristina Barcelona," for which Cruz took home an Oscar for Best Supporting Actress.

In 2008, Bardem won a Best Supporting Actor Oscar for his role as a killer in the Coen brothers' 2007 film, "No Country for Old Men, according to CBS News.