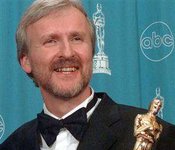 James Cameron's next big production is already in the works in Australia.

The Avatar director is planning on traveling 36,000ft to the bottom of the Mariana Trench in the western Pacific Ocean to shoot footage for the sequel to his 2009 block-buster.

To reach such depths, the filmmaker has commissioned engineers to build a custom vessel to explore the deep blue, Monsters and Critics says.

The two-seater submersible will be fitted with a heating system and 3D cameras to capture pictures of the depths for the movie, expected to hit theatres in 2014.

"We are building a vehicle to do the dive. It's about half-completed in Australia," said Cameron, whose previous watery fare has also included an expedition to find the WWII warship The Bismark.

If he is successful, Cameron's team will be only the second to ever visit the Mariana Trench, Sky Movies informs.