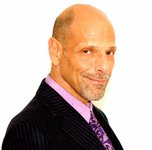 Robert Schimmel, a comedian who specialized in taboo-breaking humor of the sexual and scatological variety, died on Friday at a Phoenix hospital, where he was being treated for injuries suffered in an Aug. 26 car accident. He was 60, according to New York Times.

Schimmel was riding in a car with two of his children when their car swerved to avoid another accident and went off the road. His son and daughter survived the accident.

Schimmel, who appeared on The Howard Stern Show and HBO specials, was known for his self-deprecating humor and jokes about his own health issues (he suffered from a heart attack and overcame cancer), TIME reports.