Doctors Give Michael Douglas 80% Chance of Recovery From Throat Cancer 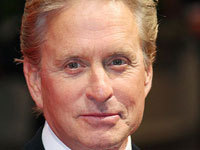 Douglas, 65, who is married to British actress Catherine Zeta-Jones, only recently revealed that he had been diagnosed with throat cancer when he returned to the United States from a family holiday three weeks ago.

But he had not mentioned the seriousness of the disease in his earlier interview with People magazine. Douglas, who has two young children with Zeta-Jones, said he was undergoing radiation and chemotherapy, AFP reports.

The actor  -  star of Wall St, Fatal Attraction and Basic Instinct  -  said on the Late Show with David Letterman on Tuesday that doctors had given him an 80 per cent chance of survival and that he had had the first week of treatment, Daily Mail says.