Charlie Chaplin's Lost Film To Be Shown in Arlington, Va

Even a genius like Charlie Chaplin had his share of walk-ons before he became a star. In 1914, he made a brief appearance in a silent film called "A Thief Catcher" which was later lost and not found until recently, when film historian Paul Gierucki found it at an antique sale in Michigan. Gierucki is part of a group called, the "silent comedy mafia." 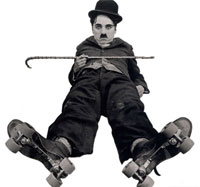 Charlie Chaplin's Lost Film To Be Shown in Arlington, Va

Now this lost film will have its first public showing in almost 100 years Saturday at a comedy film festival in Arlington, Va, NBC Washington says.

The discovery is significant because it's the first film added to Chaplin's roster in 60 years. It had been quickly forgotten. A 1938 Chaplin filmography by the British Film Institute left off "A Thief Catcher," and Chaplin never listed it himself. In the 1965 interview, the actor recalled playing a Keystone cop but didn't mention the title. Records from the Edendal, Calif., studio left out Chaplin's name.

Chaplin likely joined the cast at the last minute just because he was available, said Roberts of Phoenix, who directs the Virginia film festival, The Associated Press reports.