Domestic Cat Made Several Hundred Burglaries in the UK Portswood

A spate of thefts from gardens and clotheslines in a southern English town had been puzzling police. 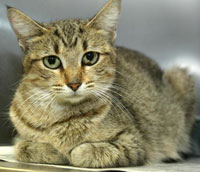 Domestic Cat Made Several Hundred Burglaries in the UK Portswood

Socks, gloves, ladies underwear ... almost anything left unattended was fair game, especially the panties, and the rate of offending was worsening.

However, now the culprit has been unmasked as a kleptomaniac cat with a generous nature.

Eager to please his new owners, Peter and Birgitt Weismantel, 13-year-old Oscar had been bringing presents to the family home in Portswood, a suburb of the coastal town of Southampton. On average, he commits 10 robberies per day, The Ottawa Citizen says.

Peter and and Birgitt Weismantel adopted Oscar from the Cats Protection charity at Christmas.

But as the 12-year-old cat started to settle in at their home in Gordon Avenue, Southampton, Hampshire, it started bringing home its stolen booty.

As the haul built up, Mr Weismantel, 72, became concerned that neighbours would think there was a thief operating in the area so he contacted police to tell them about his pet's anti-social behaviour.

Mr Weismantel said that Oscar had brought home about 70 items in recent weeks.