Mel Gibson is being investigated by police over claims he was involved in an incident of alleged domestic violence with his ex girlfriend, Oksana Grigorieva. 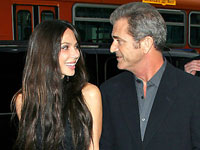 The Los Angeles Sheriff's Department confirmed that they had opened a preliminary inquiry into the alleged attack. In a statement, Lt. Richard Erikson said: "An investigation of domestic violence was launched by Malibu/Lost Hills Station Detectives in July, 2010, involving actor Mel Gibson and his former girlfriend, Oksana Grigorieva, Sky Showbiz informs.

Gibson, 54, who won an Oscar for directing Braveheart in 1995, has not spoken in public about the breakdown of his relationship with 40-year-old Grigorieva.

The actor announced they were together shortly after his wife Robyn filed for divorce in April 2009 after 28 years of marriage. The proceedings, which were initiated on the grounds of irreconcilable differences, are still ongoing, BBC News says.