Passers-by stole around 10,000 euros after a truck carrying two million in coins overturned on an Italian road. As the load spread across the carriageway, following drivers stopped to scoop them up. 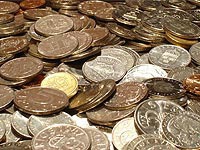 Police in Foggia said it was impossible to establish how much money had been stolen, as lots of the one and two euro coins still remained on the road, The Press Association reports.

Police in Foggia, where the accident occurred, said Tuesday that it was impossible to establish how much money had been stolen, as many of coins remain on the highway. But motorists stopped their cars acting quickly before police arrived at the scene and made off with at least $12,500.

Police said the truck's driver and one passenger had suffered minor injuries. The truck was carrying the money from the Italian mint to be transported to the local banks. The story and pictures made the front page of many Italian papers on Tuesday alongside grim articles about the coming austerity budget that will force many to make sacrifices. One called it "The miracle of the coins", Times of India informs.