Supermodel Naomi Campbell has been ordered to testify in the war crimes trial of former Liberian President Charles Taylor about a rough diamond Taylor allegedly gave her in 1997. 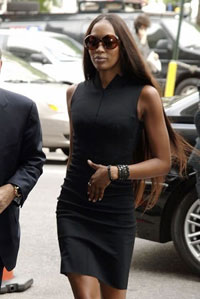 The court warned the supermodel that she could be jailed for up to seven years if she refuses to testify.

Prosecutors in The Hague want Campbell to say whether Taylor gave her a rough, or uncut, diamond as a gift during a celebrity-packed 1997 reception in South Africa hosted by then-President Nelson Mandela, The Press Association reports.

In April, Naomi reportedly grew visibly agitated when asked about receiving a "huge", uncut "blood diamond" from the dictator.

The 40-year-old supermodel snapped: "I didn't receive a 'blood diamond' and I'm not going to speak about that."

Taylor has been on trial since 2008 for crimes against humanity, after a bloody campaign he waged in Sierra Leone between 1997 and 2001, during which time he is alleged to have been involved with 'blood diamonds'.

A 'blood diamond' - also called a 'hot' or 'war' diamond - is a jewel mined in a war zone and sold to aid warlord activity or invading forces' campaigns, according to New Zealand Herald.