British actor Orlando Bloom and Australian Victoria's Secret model Miranda Kerr have announced their engagement. The pair met backstage at a lingerie catwalk show in New York in 2006 and began dating in late 2007. 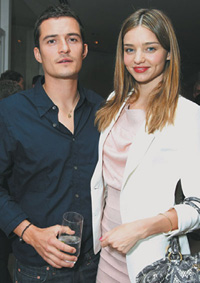 After weeks of speculation over a proposal, Bloom's publicist confirmed that the couple had decided to tie the knot, Telegraph informs.

After marriage, Miranda would prefer to have a quiet family life.

"I've always wanted kids, so someday, eventually, yes, it will happen. My ideal situation would be to live on a farm in a solar-powered house with a hammock and a vegetable patch. When this is all over, that's where I'll be," she said.

Bloom, who previously dated Superman Returns actress Kate Bosworth, reportedly proposed twice before, but the model was said to be reluctant to make the union official, NDTV.com reports.