French Catwalk Star Commits Suicide After Breaking up with His Girlfriend 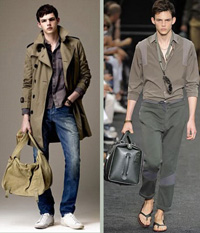 French Catwalk Star Commits Suicide After Breaking up with His Girlfriend

The French catwalk star, who was the face of British label Burberry, had just returned from a Versace rehearsal before he was found dead. The 22-year-old is thought to have been depressed after breaking up with his girlfriend and was staying with friends in the Italian fashion capital, Sky News says.

Donatella Versace said: "Tom was with us on Friday morning for a final show fitting. He seemed fine and calm. He had already done three or four shows with us and he was a sweet boy. I just can't understand why he did what he did. We would never have thought he would do something like this.

"When we heard the news we were all so upset and we still are all so very sad."

The model's death follows Alexander McQueen who committed suicide in February this year following the death of his mother, Telegraph reports.