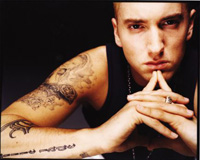 Due to be released on June 21st, the rapper's seventh album is an all star affair. R&B star Rihanna has given one track a sultry coating, adding her vocals to Eminem's typically brutal rhymes, ClashMusic reports.

Rap albums have had a particularly hard time making it all the way to their release date. They almost always seem to end up on the Internet weeks in advance. Luckily for Eminem, who is the highest selling rap artist of all time, the leak will probably do little to stop him from rising to #1 on the charts.

The album makes mention of his former best friend and rap partner, Proof, whose death lead to the apparent drug addiction that Eminem has famously suffered from , for a number of years now. The album has been received well by fans and continues to make its rounds around the Internet, Hipandpop.com informs.