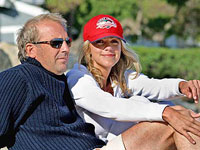 Oscar-winning director and actor Kevin Costner is a dad for the seventh time.

Costner, 55, and his wife Christine Baumgartner, 36, welcomed their third child, a baby girl named Grace Avery Costner, on Wednesday, June 2. The couple's rep tells that both mother and daughter are doing well.

The "Dancing with Wolves" star married Baumgartner, a German model, back in 2004, CBS News reports.

The couple also have two other children together—16-month-old Hayes Logan and 3-year-old Cayden Wyatt. Costner has four other children—one from a previous relationship (Liam, 13) and three from his first marriage (Joe, 22, Lily, 23, and Annie, 25), Daily Beast reports.