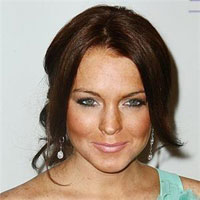 The 23-year-old was ordered to wear a Secure Continuous Remote Alcohol Monitor (SCRAM) device on Monday after a judge ignored pleas from her lawyer to undergo more frequent testing instead.

Lohan's attorney had argued the bracelet would interfere with her client's upcoming acting and modeling assignments.

Now though Lohan is seeking to help camouflage the bracelet with the help of French fashion giant Chanel, AFP says.

According to ABC News, Lindsay used Twitter to send out a plea to French fashion powerhouse Chanel.

"can CHANEL please help me out by getting me some stickers to put on my scram bracelet so that i can at least wear a chic dress?! maybe!? x," she tweeted.

But according to a spokeswoman for the Denver-based company that makes the bracelets, Alcohol Monitoring Systems Inc., glamming up her bracelet could be more than just a fashion faux pas.