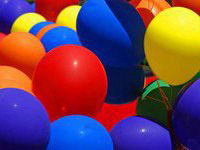 About five hours later, he lowered himself into a French field by cutting some of the balloons away. "It was just an exceptional, quiet, peaceful experience," Trappe told Sky News television, which covered the adventure.

Last month, Trappe claimed the record for the longest free-floating balloon flight after spending 14 hours blowing in the wind over North Carolina and traveling 109 miles.

On another flight, his website says he ascended to 17,930 feet, just below controlled airspace, The Associated Press reports.