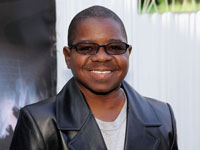 The diminutive actor -- who stood just 4-foot-8 as an adult -- was taken off life support at the Utah hospital where he'd been rushed after an accident at his home Wednesday that left him with a brain hemorrhage.

Coleman's family said he had been conscious until midday Thursday but had slipped into a coma and was placed on life support as his condition worsened.

His wife, Shannon Price, 24, was at his side when he died. She said in a statement that the family was comforted "knowing how beloved he still is," New York Post reports.

Coleman is best known as the wisecracking youngster Arnold on TV's "Diff'rent Strokes" from the late 1970s to the mid-1980s.

"There was a touch of magic and a different stroke in Gary Coleman," said TV legend Norman Lear, who produced the show. "He was the inspiration behind his show's title," CNN says.