Pope Benedict XVI has recalled Portugal's glorious past as a country of adventurers and missionaries in urging a rediscovery of its Christian heritage. 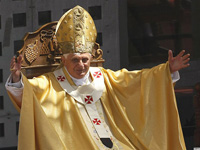 Benedict echoed a key theme of his message to an increasingly secularized Europe during a meeting Wednesday with members of Portugal's cultural elite on the second day of a four-day visit. Later Wednesday, he arrives in Fatima, the heart of the trip, to pray at the famous shrine beloved by Pope John Paul II, The Associated Press reports.

Speaking en route to Portugal, Benedict said the Catholic Church has always suffered from problems of its own making but that "today we see it in a truly terrifying way."

"The greatest persecution of the church doesn't come from enemies on the outside but is born from the sins within the church," the pontiff said. "The church needs to profoundly relearn penitence, accept purification, learn forgiveness -- but also justice." The comments marked Benedict's most thorough admission of the church's guilt in creating the scandal. Previously he blamed abusers themselves and, in the case of Ireland, the bishops who failed to stop them, Washington Post informs.