Julia Roberts topped the list of People magazine's "World's Most Beautiful People" Wednesday, marking the 12th time that the "Erin Brockovich" star has appeared in the annual special issue. 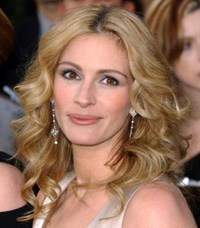 Roberts, 42, who has 5-year-old fraternal twins and a 2-year-old son, is joined on the list by several other mothers, including Halle Berry, Angelina Jolie and Jennifer Lopez, Washington Post says.

The mother of three has been named the World's Most Beautiful Woman for the fourth time. What does it take to shine like Roberts on the red carpet? The actress tells People she never takes longer than two hours to get ready -- even for A-list events like the Oscars.

Former Sexiest Man Alive George Clooney seconded People’s choice, telling the magazine that his pal and Ocean’s Eleven costar is beautiful both inside and out. "There's a reason why Julia is a timeless beauty, and it has nothing to do with the way she looks. It has everything to do with who she is.", Montreal Gazette reports.