Cameron Douglas, the 31-year-old son of the actor Michael Douglas, was sentenced to five years in prison on drug-related charges in Federal District Court in Manhattan on Tuesday. 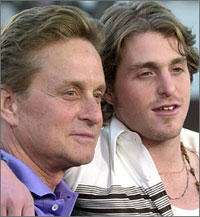 In January, Mr. Douglas, a D.J. and an aspiring actor, pleaded guilty to charges that he distributed large quantities of methamphetamines and cocaine over a three-year period. He also pleaded guilty to possession of heroin, a charge that was brought while he was on house arrest and awaiting trial, New York Times reported.

In his letter to the judge Michael Douglas wrote, "For the past eight months, I have cherished my two hr. a week in person conversation with Cameron at the MCC [Metropolitan Correctional Center]. He's sober!" Douglas wrote.

"I get to witness the wonderful young man he can be. He maintains his spirit, blames no one but himself, and recognizes his criminal activity began with his heroin use."

Douglas could have faced a minimum of 10 years in prison under sentencing guidelines, but Berman noted that other court decisions have found that those guidelines are no longer mandatory. Instead he opted to give Douglas a sentence of five years in prison, followed by five years of supervised release, according to reports in People Magazine.