The world's most evil villains can't stop him, but James Bond is in big trouble for the most mundane of reasons – a lack of cash. 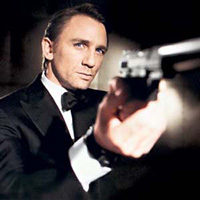 Development of the new James Bond film has been suspended indefinitely, the film's producers confirmed yesterday, because of uncertainty over the future of the Metro-Goldwyn-Mayer studio. The new unnamed movie, which will be the 23rd in the series based on the Ian Fleming hero, had been due for release in 2011 or 2012, to coincide with the franchise's 50th anniversary, The Guardian says.

Marking Daniel Craig’s third film as 007, Oscar winning director Sam Mendes was even expected to take on the reigns as director. The most recent rumors circulating around the film had Oscar winning actress Rachel Weisz up to play the film’s head villain and leader of the organization Quantum.

Fans can only hope that Hollywood will get their act together quick enough so that Bond 23 will see a future after all, TheCelebrityCafe.com informs.