A cat from New Mexico has turned up in Chicago after wandering 1300 miles from his Albuquerque home. C at named Charles was picked up by Chicago Animal Care and Control but his life was spared when staff found a microchip and contacted his owner, Citrus Daily reports. 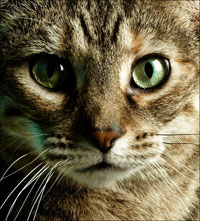 Charles disappeared about eight months ago while his owner was out of town and a friend was caring for him.

Robin Alex, of Albuquerque said, "Oh, I was crushed, and I found out while I was away volunteering with Habitat for Humanity, and I was so upset because I was in New Orleans so there was nothing I could do".

This week, Alex got a call informing her that Chicago Animal Care and Control had picked up her roving cat as a stray. The agency's Executive Director, Cherie Travis said that workers located Alex after discovering that Charles had a tracking microchip implanted between his shoulder blades.

However, Alex said that she did not have enough money for the round-trip ticket to Chicago to get Charles, and is scared that he may be euthanized.

But fellow Albuquerque inhabitant Lucien Sims, who has a tabby cat that looks like Charles was touched when his mother mailed him an online story regarding Alex and her cat.

And since Sims was already on his way to Chicago on Thursday for a marriage ceremony, he volunteered to visit the shelter and pick up Charles and get him back to New Mexico, TopNews United States reports.