Rihanna has admitted that Baseball star Matt Kemp is her boyfriend. In an radio interview with Ryan Seacrest the Rude Boy star finally spilled the beans about the romance, telling him: 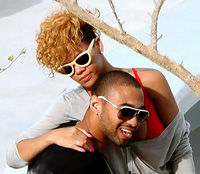 “He’s my boyfriend, It’s new and it’s fun and it’s nothing too serious. I don’t want anything that’s gonna take up so much of my energy and time right now in a bad way. I just wanna have fun and that’s what it’s about.”, MTV.CO.UK informs.

Rumors of RiRi and Kemp’s romance made headlines in early January when the two were spotted getting cozy in Mexico. Before that Kemp was spotted at her New Year's Eve performance in Dubai.

Despite the pictures of the two that circulated all over the web showing them getting cozy and kissing, the couple denied rumors of a romantic relationship, with Kemp’s publicist going so far as to release a statement saying that the two were just friends getting flirty, The Money Times reports.

The 22-year old singer is focused on her Last Girl On Earth North American tour, which she is doing with Ke$ha. She’s also taking drumming lessons from Travis Barker of Blink-182. The tour will begin in Seattle on July 2.

But despite her busy schedule, Rihanna still manages to make time to plan out Katy Perry’s bachelorette party, who’s getting married in India with beau Russell Brand, The Daily Inquirer says.