Lady Gaga's Ex-boyfriend Wants to Receive $30 Million from Her

Lady Gaga is being sued for $30 million by producer and ex-boyfriend Rob Fusari, the co-writer of Gaga’s hit "Paparazzi," who claims he discovered the singer in 2006 and created the moniker "Lady Gaga." 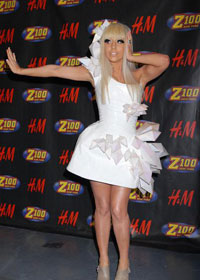 Lady Gaga's Ex-boyfriend Wants to Receive Million from Her

In the suit, Fusari seeks a 20 percent cut from Gaga’s two companies Team Love Child and Mermaid Music, saying he entered into a contract with Gaga in 2006 that also promised him a portion of her merchandising and revenue, the New York Daily News reports.

Fusari, who previously had hits with Will Smith’s “Wild Wild West” and Destiny Child’s "Bootylicious," also claims that he was shortchanged on his royalty fees, Rolling Stone reports.

Songwriter and music producer Rob Fusari filed his lawsuit in a Manhattan court on Wednesday. In court papers, Fusari describes how he took notice of quirky singer Stefani Germanotta (Gaga's given name) when she sang in his New Jersey studio in March 2006.

Fusari, whose songwriting credits include the Destiny's Child hit "Bootylicioius," claims he saw a future star in Germanotta, and over the next several months worked with her daily and "radically reshap[ed] her approach."

He co-wrote songs appearing on her debut album The Fame ("Paparazzi" and "Beautiful Dirty Rich") -- and, he says, suggested she adapt the stage name Lady Gaga. The pop star, now 23, claimed in a 2009 interview that she came up with the Gaga persona "five years ago, but Gaga's always been who I am," Us Magazine reports.