Embarrassed cops on Thursday cited a "computer glitch" as the reason police targeted the home of an elderly, law-abiding couple more than 50 times in futile hunts for bad guys. 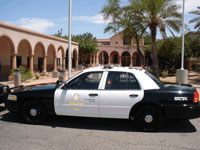 Apparently, the address of Walter and Rose Martin's Brooklyn home was used to test a department-wide computer system in 2002.

What followed was years of cops appearing at the Martins' door looking for murderers, robbers and rapists - as often as three times a week, New York Daily News reports.

Back in 2006, they even came looking for an NYPD officer on the run who was accused of rape.

The couple has written letters to NYPD Commissioner Ray Kelley and the U.S. postmaster but police still keep knocking on their door. Authorities say they are looking into the matter, saying that a computer glitch may be to blame, The Epoch Times reports.