The world's shortest man has died in Italy, where he was to take part in a TV show, the program's production company said Tuesday. 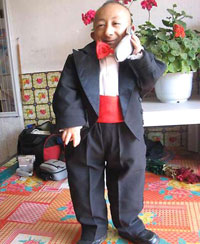 He Pingping, of China, who was 2 feet, 5.37 inches (74.6 centimeters) tall, had become a recognized figure across the world, often taking part in shows, photo shoots and other events, Guinness World Records said, The Associated Press reported.

He Pingping has died in Rome from heart complications at the age of 21, authorities said.

He, who was 29-inches tall, was in Rome for a television show with other Guinness World Record holders when he fell ill and died Saturday, China Daily reported Tuesday.

He was born in the Chinese region of Inner Mongolia with a form of primordial dwarfism. At birth, he was so small he could fit in his parents' hands, his family said, UPI reports.

Craig Glenday, editor-in-chief of London-based Guinness World Records measured He in his hometown in China.

"For such a small man, he made a huge impact around the world," he said. "From the moment I laid eyes on him I knew he was someone special – he had such a cheeky smile and mischievous personality, you couldn't help but be charmed by him.

He brightened up the lives of everyone he met and was an inspiration to anyone considered different or unusual," according to a report in Guardian.co.uk.