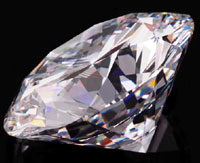 Mr Kaufmann and his business partner, Robert Rosin, were meeting a diamond dealer in late January and perusing his gems when disaster struck.

The three men were looking at a 3-carat diamond, valued at $20,000, when the stone suddenly fell to the floor - landing right next to Sollie. Before anyone could retrieve it, the dog ate the gem.

They rushed the animal to a vet, who said nature would have to take its course, so they spent three anxious days waiting to see if the gem would turn up in the dog's stool, Telegraph.co.uk reported.

"You saw Soli go for the diamond - gobbled it up," Rosin told WJLA-TV. "Tried to pull it out of his mouth, couldn't get it. Gone."

Once the initial panic passed, the owners brought Soli to a veterinarian - who advised them to let nature take it course.

Three days later, the dog and the owners were relieved when the diamond reappeared during Soli's daily walk.

"It was a happy ending to say the least," Kaufmann told the television station, according to a report in New York Daily News.