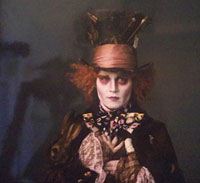 The Lewis Carroll tale “Alice in Wonderland,” re-imagined in 3-D by director Tim Burton, was the top film in the U.S. and Canada for a second straight weekend, bringing in $62 million in ticket sales for Walt Disney Co., Bloomberg informs.

Johnny Depp played the role of the Mad Hatter, and the part was perfect for him. Every time that Depp and Burton team up, they create a hit.