Avatar Offers the Challenge to Others after Oscar Nominations

Cameron's Avatar should not be regarded as loser among Oscar-winning nominees as, first of all, it personifies progress in filmmaking and jury appraisal. 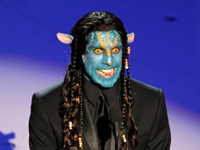 Avatar Offers the Challenge to Others after Oscar Nominations

Avatar's Oscar wins for art direction, cinematography and visual effects, which is sure to change stereotypes about Oscar-deserving film categories.

But what game is it going to change, exactly? Will it usher in a new era of ultra-high-tech movies, as "Star Wars" and "Jurassic Park" did before it? Or will it prove -- to borrow a phrase -- an "unrepeatable phenomenon"?

The answer depends on many different factors.

"Avatar" is clearly a game-changer for 3D movies. Simply by being nommed for best picture it proved that stereoscopic 3D has moved beyond gimmickry and can have a place in Oscar-worthy movies.

More importantly, auds' enthusiasm for "Avatar" in 3D, even at higher ticket prices, and the record-breaking grosses that resulted, have the majors rushing to either shoot tentpoles in 3D (Sony's "Spider-Man 4") or convert them in post (Warner's "Clash of the Titans"). Theater owners, too, are scrambling to go 3D, even in theaters that haven't gone digital.

With its Oscar for pictorialism, the movie will be seen as a triumph of visual effects, even though it doesn't debut revolutionary new techniques as "Star Wars" and "Jurassic Park" did.

Despite omitting Oscar for directing "Avatar" may have its greatest impact, though, in the minds of filmmakers.

Eric Barba, last year's Oscar-winning vfx supervisor for "Benjamin Button," said, "What he's done is inspire us. Look what we can do when we have all these tools to tell our story. I think every tentpole made after it will try to replicate that recipe for success."

Variety has contributed to the report.