Jennifer Lopez decided not to wait for spring to make changes in her life, and career, in particular, she has chosen a new music label. 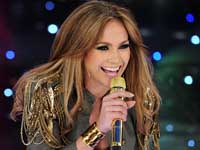 Her upcoming album, "Love?", which was slated for an April release, will now come out this summer.

There's no word on which label the "Louboutins" singer has signed with. The Web site Deadline Hollywood previously reported that she was in talks with Island Def Jam.

Although Lopez says she left for contractual reasons, there are murmurs the singer was dropped by Sony's Epic, her longtime record label, because her latest singles flopped.

"I have belonged to the Sony family since the beginning of my career as a singer and together we've had great success. I have fulfilled my contractual responsibilities with Sony/Epic up to this point, and we have both reached friendly terms about my departure from the label," Lopez said, according to "Billboard."

A Sony spokeswoman also told reporters that they are still on "extremely amicable terms" with Lopez.