"Alice In Wonderland" Will Reach Homes Earlier than Theatres 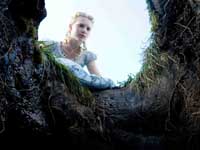 "Alice In Wonderland" Will Reach Homes Earlier than Theatres

But Disney's long-term strategy calls for less reliance on those chains in favor of revenue from Blu-ray video and online distribution, analysts say.

On Monday, less than two weeks before the movie's March 5 debut, exhibitor Odeon & UCI Cinemas Group, owned by the London-based private equity firm Terra Firma, said it does not plan to show the movie in its UK, Irish or Italian cinemas because Disney wants to sell the DVD five weeks earlier than usual.

Theater owners worry audiences will skip seeing the movie on the big screen in favor of a shorter wait for the DVD, if Disney moves up its release.

A decade ago, DVDs were typically released six months after a film's theatrical debut. But Hollywood studios have been gradually moving up their DVD releases, to tap those consumers who rarely go to the theater. Disney's move will shrink that time to 12 weeks.

Odeon Cinemas operates 110 theaters in the UK and 22 in Italy.