The Fashion industry was rocked by news that British fashion designer Alexander McQueen was found dead at his home Thursday. The British creator was known for outrageous clothing that worked its way into mainstream design. McQueen was 40 years old, NPR reports. 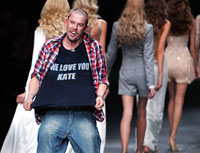 Joyce McQueen died Feb. 2, with her son detailing his depression over her death via Twitter.

The body of the four-time "British Designer of the Year" winner, covered in a nondescript maroon blanket, was brought out on a stretcher as a friend stood weeping nearby.

The tragic news reached many at the first show of Fashion Week, spread via cell phone and BlackBerries. Vogue editor Anna Wintour was among those in attendance.

"In such a short career, Alexander McQueen's influence was astonishing - from street style, to music culture and the world's museums," Wintour said in a statement. "His passing marks an insurmountable loss."

A later show began with the request for "a moment of silence to recognize the loss of a great talent, Alexander McQueen," New York Daily News reports.

According to The Press Association, Victoria Beckham and Sarah Jessica Parker have joined the list of celebrities who paid tribute to Alexander McQueen.

Posh spoke of her sadness at the loss of a "creative genius" and said he would be "desperately missed" after the designer was found dead at his home on Thursday.

She said: "McQueen was a master of fashion, creative genius and an inspiration ... the fashion industry has lost a true great, an icon of all time."

She went on: "He made all he touched beautiful and will be desperately missed."

Sarah Jessica - who famously attended New York's Metropolitan Museum of Art Costume Institute Gala in 2006 with the designer, both wearing matching outfits - said she was "shocked and overcome with grief upon learning about the untimely death of the quiet genius" in a statement published by People.com.